As an adviser in Jimmy Carter’s White House, David Rubenstein had a front row seat to the economic turbulence of that era, which severely affected Carter’s presidency. Now, several decades later, the headwinds of inflation are being felt again. But, Rubenstein, now 72, is more confident in the economy than he was in the late ‘70s.

Indeed, the economy is top of mind for many as workers are starting to return to their offices and COVID restrictions are being eased nationwide. President Joe Biden also made it a point to address inflation in his State of the Union speech.

Macroeconomic trends and stock market performance are just two of the subjects Rubenstein is known to opine on. He has drawn raves for his insightful interviews of some of the greatest minds including Yo-Yo Ma, Oprah Winfrey, Lloyd Blankfein, among other luminaries. Rubenstein also is an original signer of the Giving Pledge, started by Warren Buffett, Bill Gates and Melinda French Gates, whose mission is for the world’s wealthiest to commit at least half of their net worth to philanthropy. Rubenstein is well known for coining the phrase “Patriotic Philanthropy,” which he defines as philanthropy designed to help people remember the history and heritage of the United States.

In an exclusive conversation, Rubenstein will provide advice on how others might develop their own unique approach to philanthropy. He is passionate about American democracy and will discuss his views on reforming our political process and how the US can compete against China’s more direct political decision making process. Rubenstein sits on the boards of Harvard and the University of Chicago, and will speak about being a board member of our great American academic institutions. Join us for a provocative session probing one of today’s greatest business minds.

Participants must register by Noon on March 20th to receive details on joining the discussion. The Zoom link will be sent out 24 hours before the event. 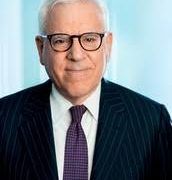 David M. Rubenstein is co-founder and co-chairman of The Carlyle Group, one of the world’s largest and most successful private investment firms. Rubenstein is Chairman of the Boards of the John F. Kennedy Center for the Performing Arts, the Council on Foreign Relations, the National Gallery of Art, and the Economic Club of Washington. He is an original signer of The Giving Pledge and a recipient of the Carnegie Medal of Philanthropy and the MoMA’s David Rockefeller Award, among other philanthropic awards. Rubenstein is host of The David Rubenstein Show and Bloomberg Wealth with David Rubenstein and is the bestselling author of three books.