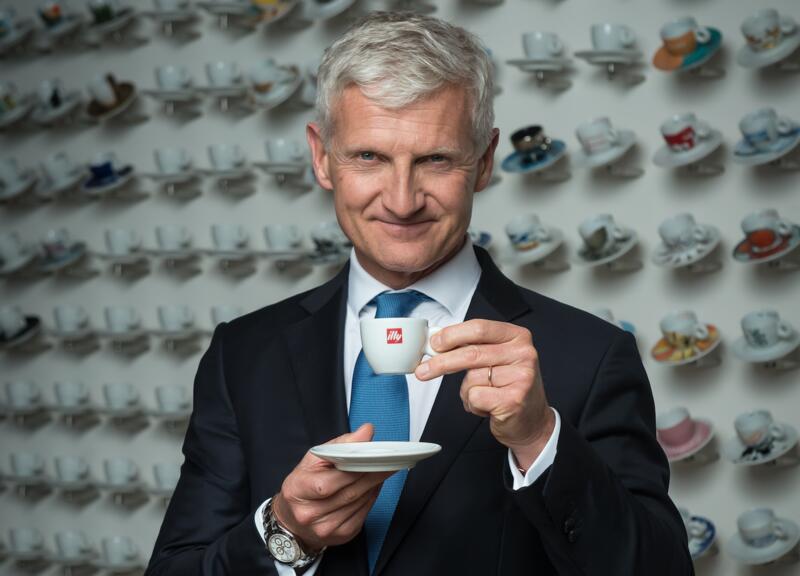 Since 1990, chiefly under Mr. Illy’s leadership, illycaffè has recorded double-digit growth, and has become the most global coffee brand and quality leader. The company is famous for its innovation in espresso technology, and pioneered significant advances in its industry, such as directly sourcing coffee from growers and paying a premium on top of market prices, establishing the University of Coffee to propagate coffee knowledge, and developing the first-ever third-party sustainability certification for a value chain. illycaffè has been recognized as the most sustainable company in the coffee sector (ICRT, 2014), as one of the World’s Most Ethical Companies (Ethisphere Institute, 2013-2021). The company won the Italian Best Performance Award in 2017.

Mr. Illy’s numerous appointments outside of his company include:

• from 1999 to 2014, president of ASIC – the sole international association dedicated to the science of coffee;
• from 2012 to 2013, board member and chairman of the Sustainability Committee of D.E. Master Blender 1753, contributing to the company’s spin-out and subsequent sale;
• from 2012 to 2015, chairman of the Promotion and Market Development Committee of the International Coffee Organization, for which he oversaw the largest celebration of coffee during the EXPO Milano 2015;
• from 2013 to 2019, chairman of the Altagamma Foundation – an organization which represents the most important Italian luxury brands;
• starting in 2013, member of the Board of Directors of the Bank of Italy and, from 2015, of its Internal Audit Advisory Committee;
• from 2017 to 2020, member of the Assolombarda Advisory Board, the Milan industry association;
• Starting in 2020, co-chairman with Jeffrey D. Sachs of the Regenerative Society Foundation.

Recognized as a coffee authority, Mr. Illy’s writings are published on a regular basis, and he serves as a speaker at major conferences throughout the world. In 1995, he published Espresso Coffee: The Chemistry of Quality (Academic Press), now in its second edition, and his memoir, A Coffee Dream, was published in 2015 (Codice Edizioni). In 2018 was published Italia Felix (Piemme), a conversation with the journalist Francesco Antonioli. He was the main contributor to Altagamma: Strategie per l’Italia d’Eccellenza, published in 2018 (Skyra). From 2019 he began the development of a Virtuous Agriculture model, beneficial for the environment and health.

He is a passionate supporter of the stakeholder company business model, and firmly advocates for corporate responsibility as means to improve society. A “humanist chemist,” as he likes to define himself, Mr. Illy also promotes culture and art, a sphere in which illycaffè has always been active. Under his leadership, the Altagamma Foundation was officially recognized as an ambassador of the Italian lifestyle in the world.

His numerous professional recognitions include Marketing Superstar (Advertising Age, 1996); Entrepreneur of the Year (Ernst & Young, 2004); Capo d’Orlando (2013), and Guido Carli (2014). He was named Cavaliere del Lavoro by the President of the Italian Republic in 2018.

Participants must register by NOON on September 14th to receive details on joining the discussion. The Zoom link will be sent out later that evening.

Mr. Illy received a degree in Chemistry from the University of Trieste, and an Executive MBA from SDA-Bocconi in Milan. Additionally, he graduated from the Advanced Management Program at Harvard Business School in 2012, and studied Total Quality Management in Japan, Innovation at MIT, Exponential Technologies at Singularity University and Complexity Science at the University of Oxford.

Born in Trieste in 1964, he is married and has three daughters.