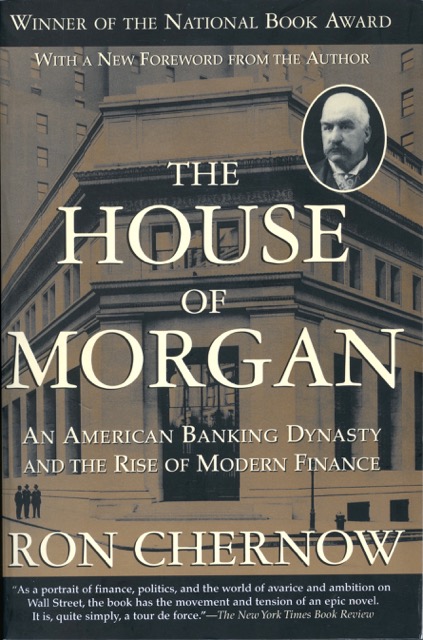 The House of Morgan published in 1990 was Ron Chernow's first book. It received the 1990 National Book Award for Non Fiction. The author explains in his preface to the 20th anniversary edition how the idea to write a book on American finance came to him. In the mid-1980s, "during the heyday of the bull market that roared through Ronald Reagan's presidency, huge numbers of people were swept into the financial world for the first time" with "little historic perspective on the new world they inhabited." It dawned on him that "the hordes of financial novices might be ripe for a history that would chronicle how the old Wall Street evolved into the new." He reasoned that the best way to make such a history interesting would be to focus on "a single family or firm whose saga could serve as a prism through which to view the panoramic saga of Anglo-American finance."

He concluded that "only one firm, one family, one name rather gloriously spanned the entire century and a half that [he] wanted to cover: J.P. Morgan." In his search for sources of information, he "made a startling discovery: the papers of Thomas W. Lamont, senior partner of the Morgan bank during the inter-war years, resided at the Harvard Business School Library." This is where he started his research before he found papers of other Morgan partners in other universities and at the Morgan Library in New York.

We hope that you will read or read again this fascinating history of the development of the world of finance and come to discuss it with other senior alumni at our next book club meeting on May 24.

Venue: Attendees will be notified by email