One year ago, Ray McGuire was running hard to be mayor of New York City. His campaign came to an end when he failed to win the June 2021 Democratic primary election.

In conversation with author/journalist Jacqueline Adams (MBA 1978), McGuire will discuss what he learned during the campaign, what comes next in his career, and his analysis of the state of U.S. and NYC politics writ large.

McGuire joined the mayoral race after leaving behind an impressive decades-long career in finance, including his unprecedented 13-year stint as a Vice Chairman at Citigroup. His personal story as the child of a single mother from Dayton contrasted with his successes as one of the highest-ranking and longest-serving Black executives on Wall Street and a leader in the city’s arts and philanthropic communities. His experiences, however, could not compensate for his lack of a strong political base or name recognition outside of Manhattan.

His lengthy resume demonstrates that McGuire has long been committed to public service. The questions now are where next and how.

Participants must register by NOON on May 30th to receive details on joining the discussion. The Zoom link will be sent out 24 hours before the event.

With a career spanning nearly four decades, Raymond J. McGuire has distinguished himself as a leader in the financial world as well as a philanthropist with a deep commitment to giving back and giving opportunities.

In 2020, Mr. McGuire left his role as Vice Chairman of Citigroup and Chairman of Citi’s Banking, Capital Markets and Advisory business to pursue public service. While at Citi, Mr. McGuire held a 13-year term as Citi’s Global Head of Corporate and Investment Banking, the longest tenure for this position in the history of Wall Street. Under his leadership, Citi leveraged its unmatched global network to meet multinational and sovereign clients’ working capital, debt and equity capital raising and strategic Mergers & Acquisitions needs. Mr. McGuire has personally advised on transactions across global industries and geographies valued at $700 billion+, including Time Warner/AT&T (the fifth largest transaction in history).

Through his dedication to mentoring, Mr. McGuire has not only mentored hundreds of individuals, but he has also served on advisory boards for the Council of Urban Professionals, Sponsors for Educational Opportunities and Management Leadership for Tomorrow.

Mr. McGuire has received numerous honors and distinctions including the Theodore Roosevelt Award from the Legal Aid Society, the John C. Whitehead Social Enterprise Award from the Harvard Business School Club of NY, the Public Service Award from Big Brothers Big Sisters, the Trailblazer Award from the MBBA, the Humanitarian Leadership Award from CUP (“Council of Urban Professionals”) and the Frederick Douglass Award from the New York Urban League. He was also recognized by New York’s Avenue Magazine as one of New York’s “50 Smartest” and by Crain’s as one of the “Most Connected New Yorkers”. ARTnews includes Mr. McGuire on its list of the world’s “Top 200 Collectors” .He was inducted by Morehouse College as one of the inaugural members of the Martin Luther King, Jr. International Board of Renaissance Leaders. He was also featured in Black Enterprise Magazine as one of the “100 Most Powerful Executives in Corporate America” and on the cover of Black Enterprise Magazine as one of the most powerful Blacks on Wall Street. Mr. McGuire has been honored by New York Needs You, the Make-A-Wish Foundation, Studio in a School and the National CARES Mentoring Movement. He has also served as Corporate Chair for the 2016 Howard University Charter Day. Pratt Institute honored him as its inaugural distinguished “Patron of the Arts.” Mr. McGuire has also been honored with Harvard Business School’s African American Student Union’s Professional Achievement Award, has presented at Harvard Law School’s Traphagen Distinguished Alumni Speaker Series and emceed the first Harvard College Black Alumni Weekend.

Mr. McGuire resides in New York City with his wife, Crystal McCrary McGuire. Together they are raising three children. 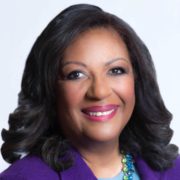 In 2020, she and co-author Bonita C. Stewart (MBA 1983) published “A Blessing: Women of Color Teaming Up to Lead, Empower and Thrive.” Together, they have conducted three rounds of proprietary research, Women of Color in Business: Cross-Generational Survey©. Ms. Adams is also the author of “Climate Stories” for the HBS Business and Environment Initiative.

Ms. Adams spent five years as a CBS News White House correspondent during the Ronald Reagan and George H. W. Bush administrations. In the 1990s, she was a prolific contributor to the CBS Evening News and CBS News Sunday Morning. She serves on the board of the Harvard Business School Club of New York and is a member of the Council on Foreign ​Relations, the International Advisory Committee of the U.S. Institute of Peace, and the Advisory Council of the Milken Center for Advancing the American Dream. She is a patron of the Alvin Ailey American Dance Theater and is in the sixth year of study at the Juilliard School of Music’s Extension Division. 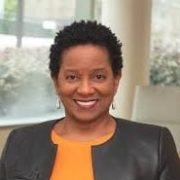 Beverly Anderson is a C-suite executive with years of experience building businesses, driving growth and innovation and delivering significant results across the Financial Services, Payments and Fintech industries. Beverly’s career has spanned business-to-business and consumer sectors and reflects a demonstrated track record of delivering visionary business strategies, executing game-changing growth initiatives to drive top and bottom line financial performance, and leading transformative, large-scale digital platform and technology projects to enhance customer experiences, automate operational processes and drive efficiencies. She is also known for her authentic leadership, revitalizing teams, developing the next set of leaders, and creating global followership. Beverly is a strong risk management leader with ample experience with key regulatory agencies. She also brings deep corporate governance experience through her work as a Board Director at Expedia Group, where she serves as a member of the Compensation Committee. Beverly serves as a Business Advisor to Brown Estate Winery.

Most recently, Beverly was the President of Global Consumer Solutions at Equifax. a publicly traded, $4B credit reporting agency and fintech company with a market capitalization of $35B. She has also served in leadership and P&L roles at Wells Fargo, American Express, Novantas Consulting and numerous commercial and retail banks.