Mon, 6:00 PM TO 7:00 PM Zoom Webinar (Information to be sent to Registrants 2 days prior to the event)
General PublicFinance

Jeff Immelt knows a thing or two about dealing with adversity. He became CEO of General Electric on September 7, 2001, replacing the legendary Jack Welch. Little did Immelt know he would have to deal with a catastrophic incident just a few days into his tenure. The September 11 terrorist attacks cost GE’s insurance business over $600 million, in addition to dealing a massive body blow to its Aircraft Engines sector.

Immelt joined GE after graduating from Harvard Business School. He spent 19 years in several executive positions, essentially knowing every part of the global conglomerate’s business intimately. But the 9/11 attacks put whatever ideas he had for GE on hold.

Immelt knew his response would set the tone for businesses everywhere that looked to GE—then one of America’s biggest and most-heralded corporations—for direction.

Over the next sixteen years, Immelt would lead GE through many more dire moments, from the 2008–09 Global Financial Crisis to the 2011 meltdown of Fukushima’s nuclear reactors, which were designed by GE. But Immelt’s biggest challenge was inherited: Welch had handed over a company that had great people but was short on innovation. Immelt set out to change GE’s focus by making it more global, more rooted in technology, and more diverse. But the stock market rarely rewarded his efforts, and GE struggled.

Immelt left GE in October 2017. He has since joined a few corporate boards and is now a venture partner at New Enterprise Associates. With the benefit of time and reflection, Immelt has written a memoir of his GE tenure, Hot Seat: What I Learned Leading a Great American Company, (Simon & Schuster, Feb. 2021).

Immelt offers a rigorous, candid interrogation of himself and his tenure, detailing for the first time his proudest moments and his biggest mistakes. The most crucial component of leadership, he writes, is the willingness to make decisions. But knowing what to do is a thousand times easier than knowing when to do it. Perseverance, combined with clear communication, can ensure progress, if not perfection, he says.

“Hot Seat is a must read for anyone wanting to learn about what it takes to lead through turbulent times. The real world is full of tail events, constraints, and circumstances you do not control. Jeff’s book is full of insights on what it takes to show up and lead and move the organization and world around you forward,” observes Satya Nadella, CEO, Microsoft.

Jeff Immelt was the dinner chair of the HBS Club of NY annual dinner in 2014. The Club is pleased to welcome him back for this no holds barred conversation, moderated by Club board member Hemali Dassani.

Participants must register by May 9th to receive details on joining the discussion. 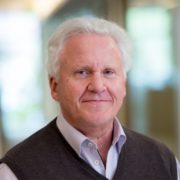 Jeff Immelt was the ninth Chairman of GE and served as CEO for sixteen years. He has been named one of the “World’s Best CEOs” three times by Barron’s. During his tenure as CEO, GE was named “America’s Most Admired Company” by Fortune magazine and one of “The World’s Most Respected Companies” in polls by Barron’s and the Financial Times. Immelt has received fifteen honorary degrees and numerous awards for business leadership and chaired the President’s Council on Jobs and Competitiveness under the Obama administration. He is a member of The American Academy of Arts & Sciences, and a lecturer at Stanford University. Immelt earned a BA in applied mathematics from Dartmouth College and an MBA from Harvard University.

Hemali Dassani (MBA ’99) is an experienced fundraiser and investor relations professional within the alternative investments space and is currently a placement agent and consultant to multiple Private Equity funds. Hemali was previously Director of Investor Relations for Argand Partners and Castle Harlan, middle market private equity funds. Hemali was also a Managing Director with Old City Investment Partners, a multi-family office dedicated to finding high quality investments for the firm’s clientele of family office investors. Ms. Dassani has an M.B.A. from the Harvard Business School and a B.Sc. in Industrial Engineering from Northwestern University. She was President of the Harvard Business School Club of Greater New York and currently sits on the Board of the Club and Chair’s its racial equity task force. Previously she sat on the Board of Governors for the Harvard Business School Real Estate Alumni Association and the Steering Committee for the Harvard Business School Alumni Angels Association.

Zoom Webinar (Information to be sent to Registrants 2 days prior to the event)1460 Broadway
New York, NY 10036
View Map