Thomas Keller may be one of the world’s most decorated chefs with a myriad of accolades, cookbooks and restaurants under his empire, but it wasn’t always this way. Chef Keller began his career as a dishwasher and it was those lessons learned in this role that would lay the foundation for what was ahead: the exacting sense of detail, the intricacy of the interplay between food, drink, ambience and the people you share it with; and, the overall pursuit of excellence.

Chef Keller will join the HBS Club of New York for an exclusive discussion about his career and the lessons he has learned. In addition, participants will enjoy a delectable hour of passed canapés and cocktails, followed by a five-course wine-paired meal in Per Se’s private dining room.

Limited capacity. All of our Wine & Dine series events sell out quickly.

Please join us for what is sure to be one of the most memorable evenings of your life. Read more about Chef Keller at www.thomaskeller.com.

Pricing is $700pp Member and up to 3 guests; $750pp Non-Member, including tax and service fees. All attendees will get a signed cookbook. 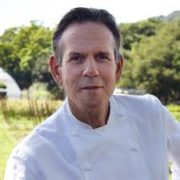 Thomas Keller is renowned for his culinary skills and his exceptionally high standards. He has established a new paradigm within the hospitality profession. He is the first and only American-born chef to hold multiple three-star ratings from the prestigious Michelin Guide, as well as the first American male chef to be designated a Chevalier of The French Legion of Honor, the highest decoration in France. He has received countless accolades, including The Culinary Institute of America’s “Chef of the Year” Award and the James Beard Foundation’s “Outstanding Chef” and “Outstanding Restaurateur” Awards.

Keller is the author of five cookbooks, of which more than 1.3 million copies are in print.
Having recently celebrated its twenty-fifth anniversary since Chef Keller took ownership of The French Laundry, his French bistro, Bouchon, debuted in 1998, followed by Bouchon Bakery five years later. Both are within walking distance of The French Laundry located in Yountville, CA. Since then, Chef Keller has opened outposts of Bouchon and Bouchon Bakery in New York City and Las Vegas. His two other Yountville restaurants are family-style Ad Hoc + Addendum, and La Calenda, a Mexican restaurant, where Chef Kaelin Ulrich Trilling leads the culinary program. In 2017, Chef Keller opened Bouchon Bakeries in the Middle East with partner M.H. Alshaya Co. and continues to introduce new dining experiences to guests in that region. In the summer of 2018, Chef Keller opened The Surf Club Restaurant, in Surfside, Florida, celebrating Continental cuisine. In March 2019, he launched TAK Room, in New York City.

Known for his leadership, he has assembled a team that shares his philosophy in his restaurants, enabling him also to concentrate on interests outside the kitchen, including his Napa Valley wine label with Laura Cunningham, Modicum, as well as a Yountville-based magazine, Finesse, and retail outpost of the same name. Chef Keller has embarked on several innovative partnerships. In his newest collaborations, Chef Keller partnered with Armando Manni, an acclaimed olive oil producer, to develop a line of chocolates, K+M Extravirgin Chocolate, that is revolutionizing bean-to-bar chocolate production with its proprietary method of boosting antioxidant levels. He has also partnered with Shaoching Bishop to launch Regiis Ova, the ultimate caviar experience.

Chef Keller cofounded Cup4Cup, a line of gluten-free flour blends and mixes that substitutes for all-purpose flour in home recipes. Chef Keller collaborates with Cangshan Knives and Hestan Commercial on design. Together with restaurant designer Adam D. Tihany, he created K+T, a collection of silver hardware and cocktail ware for Christofle silversmiths. Chef Keller’s collaboration with Raynaud and design firm Level has led to a sophisticated collection of white porcelain dinnerware called Hommage. Chef Keller also consulted on the films Spanglish and Ratatouille, the latter winning in the 2007 Best Animated Feature Film category at both the Golden Globes and the Academy Awards.