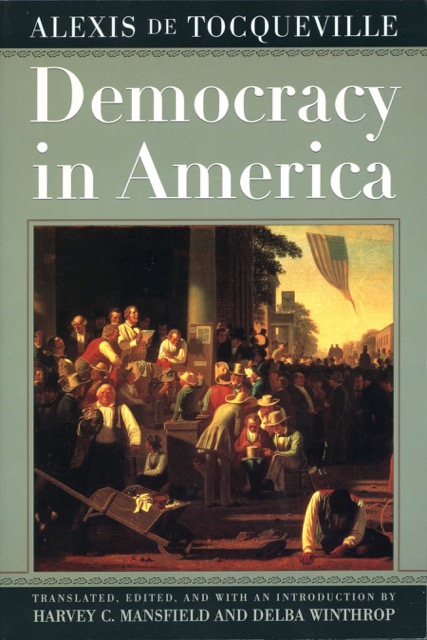 Alexis de Tocqueville’s Democracy in America, translated, edited and with an introduction by Harvey C. Mansfield and Delba Winthrop

Alexis de Tocqueville was born on July 29, 1805 into a very old aristocratic Norman family. His parents narrowly escaped execution during the French Revolution. He was led to reflect on the birth of democracy in France and in America from a young age.

Tocqueville traveled to the United States from April 1831 to March 1832. The ostensible reason for the trip was to prepare a report on the American prison system, which had been commissioned by the French government. Tocqueville himself called this a “pretext”, for his real purpose was to study the democratic system of government in the United States and to compare it to the emerging democracies in Europe.

The work was published in two volumes, in 1835 and 1840, respectively. The English translation combines both volumes in a single book. The first volume is the analysis of the natural rise of democracy in America and of the institutions of a great republic, while the second is Tocqueville’s reflections on the influence of democracy on America. To put it differently, the first volume is about the character of the people who created democracy in America, which explains the specific form and institutions of this democracy, while the second is a reflection on how democracy is likely to affect the people of America, and, more broadly, on how democracy, as it naturally evolves, may affect any people living under this form of government.

Tocqueville is perhaps the most quoted political philosopher on the subject of democracy. As the translators boldly state in the first sentence of their introduction: “Democracy in America is at once the best book ever written on democracy and the best book ever written on America.” Even though the democratic institutions of the United States have evolved since Tocqueville’s time, the basic structure of the constitutional arrangement and the philosophy behind it have not fundamentally changed, and the author’s reflections on the future of the democracy he observed in the 1830s remain relevant today.

It is a long book (676 pages plus notes and a 70-page editors’ introduction), but this early notice will give you plenty of time to read it, in addition to whatever summer reading you have planned. The first meeting of the third season of our book club will be in October rather than in September. The following meeting will be on November 15, to return to our normal schedule. It will be on a much shorter book.

As an introduction to Tocqueville and his book, you may find the three attached videos enlightening. They are the last three lectures of an undergraduate introductory course on political philosophy given by Professor Steven B. Smith at Yale University.

ADDENDUM: Chapters on which the discussion will likely be focused and suggested additional readings

The main themes of this very rich book are:

To discuss these principal themes, we may want to focus on the following chapters.

The editors’ introduction provides an excellent guide to make sense of the book by summarizing and discussing Tocqueville’s arguments. It is well worth the time to read it.

You can find more information about Alexis de Tocqueville himself, his voyage to America, and the philosophers who influenced him, in a very short book (about 100 pages) by Harvey Mansfield: “Tocqueville: a very short introduction”.