Anne Neuberger will discuss her exciting journey from being Senior Vice President of Operations at American Stock Transfer & Trust Company to being named the Director of Cybersecurity for the National Security Agency. Topics covered will include:

This is an event you will not want to miss!

Participants must register by September 21st to receive details on joining the discussion. 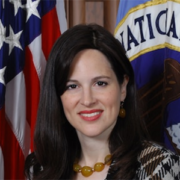 Anne Neuberger is the National Security Agency’s Director of Cybersecurity, responsible for directing NSA’s cybersecurity mission. Prior to this role, she led NSA’s Election Security effort and served as Assistant Deputy Director of NSA’s Operations Directorate, where she led NSA’s foreign intelligence and cybersecurity operations. She also previously served as NSA’s first Chief Risk Officer, as the Director of NSA’s Commercial Solutions Center, responsible for NSA’s partnerships with the private sector, as the Navy’s Deputy Chief Management Officer and as a White House Fellow, working for Secretary of Defense Robert Gates.

In 2017, Anne was awarded a Presidential Rank Award for her service at the National Security Agency.

Prior to joining government service, Anne was Senior Vice President of Operations at American Stock Transfer & Trust Company (AST), where she was responsible for directing operations, including dividend distributions, complex mergers, and acquisition processing for approximately 2,000 publicly traded companies.

OTHER:
Anne has lectured on cybersecurity, public/private partnerships, risk, surveillance/civil liberties and national security as a guest lecturer at Harvard University, Stanford University and Columbia University. Anne founded a not for profit that serves single mothers across the U.S., and serves on the boards of several charities assisting women, children with life threatening illness, and individuals with ALS.