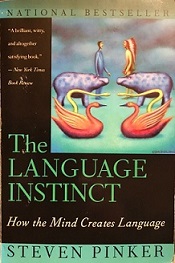 "The Language Instinct: How the Mind Creates Language" by Steven Pinker

Language is what most clearly distinguishes humans from animals. You may have asked yourselves: "Where does language, this ability to transmit and understand complex ideas and feelings, come from?" Steven Pinker states in his preface to the book: "I have never met a person who is not interested in language. I wrote this book to try to satisfy that curiosity."

Perhaps you never found the time to look for an answer to that question, or you may have attempted to read the most famous linguist in America, Noam Chomsky, but you could not understand him, for, as Steven Pinker says, "Chomsky's arguments about the nature of the language faculty are based on technical analyses of word and sentence structure, often couched in abstruse formalisms, his discussions of flesh-and-blood speakers are perfunctory and highly idealized".

Then the author adds: "Though I happen to agree with many of [Chomsky's] arguments, I think that a conclusion about the mind is convincing only if many kinds of evidence converge on it. So the story of this book is highly eclectic, ranging from how DNA build brains to the pontifications of newspaper language columnists. The best place to begin is to ask why anyone should believe that human language is a part of human biology–an instinct–at all."

Since you now have the time to satisfy your curiosity about language, we invite you to read this "brilliant, witty, and altogether satisfying book" (New York Time Book Review) and to come to discuss it with other senior alumni and alumnae on March 22.

Venue:
Since we host this event at a fellow alum's house, exact address with apartment number and phone number will be announced to registrants only.